Gastronomic tour around the world

In December 2019, Peru was named “Best Culinary Destination in the World” at the World Travel Awards for the 8th time! As lovers of good food, the French often like to combine the pleasures of tourism with those of the taste buds. If Peru is therefore the destination to add to its “bucket list” to marry these two pleasures, it is not the only one to be a must-see culinary destination. A little gastronomic world tour!

Considered the Oscars of Tourism, the World Travel Awards have consecrated Peru 8 times as the best culinary destination in the world (among other awards). In addition, in 2019, the South American country also had two restaurants in Lima, its capital among the top 10 of the 50 best restaurants in the world! Two prestigious places where you can taste one of its 500 typical dishes. The fruit of a history tinged with many influences, Peruvian cuisine also offers fusions with flavours from Africa, Asia and Europe. Emblematic, the arroz chaufa (fried rice dish) is the result of a marriage of Chinese and Peruvian cuisine. Ceviche, now very popular in some trendy restaurants in Paris, is another typical dish: it is a marinade of fish or seafood with tangy flavours. More surprisingly, the cuy stew will perhaps tempt the most daring… provided they agree to eat guinea pig!

Mexico: a gastronomy listed as a UNESCO World Heritage Site

In Latin America, Mexico is another must-see culinary destination. Mexican cuisine is a UNESCO World Heritage Site. If you are familiar with chili con carne, you may not know that it is available in more than 200 different recipes. Not only beans, but also avocado, corn and tomato are the main ingredients in Mexican cuisine. Enchilladas, panadillas, tortillas, guacamole, tacos and tamales are all available. In some cities, famous for their street food (such as Oaxaca, in the south of Mexico), you will have the opportunity to enjoy typical dishes by visiting local markets.

Heading to Southeast Asia to fill up on spicy flavors. In Thailand, curry, lemongrass, coriander and basil spice up the dishes. A must, the pad thai (with shrimps or chicken) can be eaten in street food mode, according to your visits. Don’t forget to try the Thai massaman, a beef and cashew nut curry. This mild Thai curry from the Muslim tradition can sometimes be served with duck, tofu, chicken, lamb or pork. As for dessert, surprising and not very appealing because of its strong and nauseating smell, durian can be eaten fresh or as a dessert, in a form cooked with sticky rice, for example. And on the drinking side, if you were to be surprised by a naam gek huay, chrysanthemum flower juice?

In India too, spices are king! Turmeric, cumin, saffron and nutmeg are used in dishes that vary greatly from one region to another. If we know Indian specialities as they are served in restaurants in France, authentic Indian cuisine will surprise Western palates even more. Between the gastronomy of North India and that of South India, the gustatory pleasures vary! Mostly vegetarian, the cuisine of the South offers a variety of dishes based on vegetables (korma vegetables, matar paneer, lentil dahl…) and dried fruits. In the North, carnivores can enjoy meat in the tandoor or mughlaïe style, such as chicken tikka or biryani.

Japan: a marriage of flavours and traditions

In the Land of the Rising Sun, cuisine is inseparable from traditions. Family meals follow certain rules. It usually starts with soup, then a bowl of rice and 3 side dishes follow: most often vegetables and fish, rarely meat, which is more often found at the festive meal table. If there is no order to start these foods, they should be finished at the same time. Although sushi and other sashimis are more familiar in France, in reality the traditional Japanese national dish is ramen. These fine noodles served in broth are seasoned with soy sauce and salt and pork, seafood, vegetables, eggs or onions are added. During your trip to Japan, you can also enjoy tontsaku, a typical dish made of breaded pork covered with sauce.

Morocco, a warm and delicious cuisine

Morocco is famous for the warmth and kindness of its hosts but also for its cuisine. It is the result of several influences: Berber, Arab, Andalusian, Jewish… If couscous is surely the most famous dish, it should not make you forget the other delicacies that can be discovered in Moroccan cuisine. Many dishes offer subtle sweet-salty mixes such as tagines, but you can also taste vegetable salads (such as mechouia, a “grilled” salad) and fresh fruit. You can also enjoy briouats (small meat or fish puff pastries), pastilla and tagoula (a barley flour porridge). The “sweet beaks” are not forgotten. What could be better than a pastry made with honey, almonds or orange blossom accompanied by the traditional mint tea?

If there is one country that has adopted its cuisine everywhere, it is certainly Italy. Pizza is one of the most popular dishes in the world. However, there is more to Italian cuisine than that. For a start, pasta comes in all its forms. In Italy, too, regional specialities contribute to the richness of the cuisine. Let yourself be tempted by lasagne when you visit Bologna (they even have a dedicated feast), by agnolotti if you visit Piedmont, taste a real Neapolitan pizza in the capital of Campania and finish with a tiramisu in Venice!

Spain, a gastronomic and festive destination

Spain is a culinary and festive destination. Spaniards usually eat lunch and dinner late and the aperitif is king. Hence the success of the tapas that delight everyone: patatas bravas, tortillas, ham croquettes… Spain is also famous for its delicious cold meats: chorizo, fuet, cured ham… Saffron rice is the preferred accompaniment to grilled meats and fish, and each region offers its own specialities. In Valencia, go for a paella, in Barcelona, finish in beauty with a Catalan cream! And celebrate it all with a bit of sangria (always in moderation, of course)!

France, famous for its good food

We couldn’t complete this little culinary world tour without a little chauvinism! France is certainly one of the most famous destinations for good food. Numerous starred chefs contribute to making its gastronomy known and evolving in the great restaurants of the world. But each region has its own specialities and contributes to the diversity of French cuisine. From north to south, from east to west, according to your escapades, don’t hesitate to discover them if you haven’t already! To you the bouillabaisse, the sauerkraut, the cassoulet, the Savoyard or Burgundy fondue, the duck confit, the welsh… Without forgetting to discover the cheeses, desserts and regional wines, also famous throughout the world. 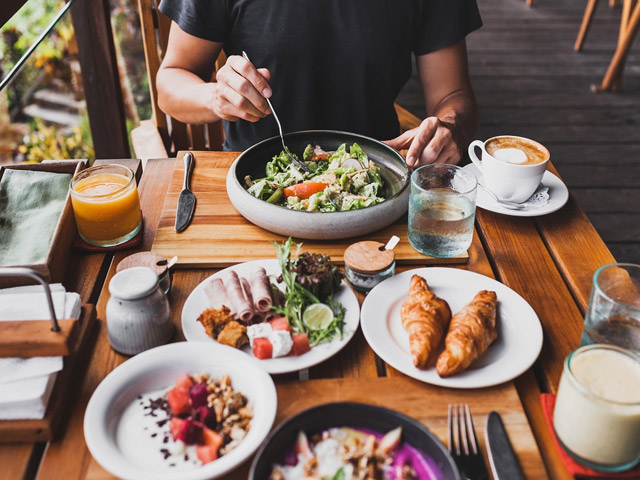